The day is still very clear in my mind. Two and a half years back when God gifted me Aishwari. And now she was all ready to go to play school. My heart was filled with all sorts of fear. Although I had trained her properly about washroom habits but all this time I was always around. Now she had to be on her own. Haven’t we heard that mom is the best saviour for her child? But putting an end to all those worries I had to make her ready for the school.
Aishwari has always been a darling child and most importantly very social. So preparing her for the school was not a big task. Only, I had to constantly teach her about the hygiene habits. And she kept on saying, “Yes mom, and don’t worry. I remember each and everything. I know that I have to wash my hands with soap before every meal and after going to the washroom.” She kept on mumbling and went in her taxi.
All day long, I kept thinking about her whereabouts only. And just when the clock struck one and there she was; running towards me, my little doll. As I hugged her, my list of queries started. Surprisingly, she said, “Mom, there was no soap in the school so how could I wash my hands? So I ate with my dirty hands only.” I felt bad and talked to her teacher about the same. The teacher replied that she would look into the matter soon. But it was the same story the next day too. 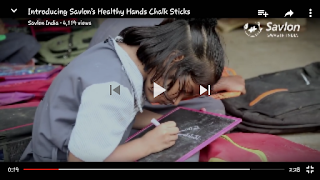 I was trying to take out some solution from my side when one day Aishwari got a chalk in her pocket. I was amazed. I asked her why she has got chalk in her pocket. To which she replied that children were playing in the class with chalks. She liked it and brought one home. Rest of the day she kept on telling me all sorts of stories. What chalk is made of? What are its benefits? She went on playing and kept on murmuring what not. I didn’t even listen to her long stories. 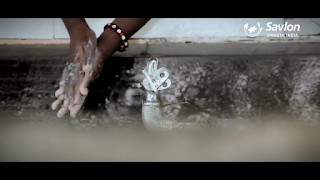 One thing that caught my attention was when she said that she washed her hands with chalk in school. She further said that the chalk worked just like soap. And I got surprised. I went up to her and listened to her whole story again. She could not clearly tell or I could not understand her. So I went to the school and talked to her teacher. Her teacher explained me the same in detail. 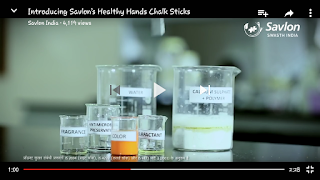 With Savlon Healthy Hands Chalk Sticks, the chalk powder on the hand turns into a cleanser just like a soap and generates lather as soon as it is placed under water. The dust from the chalk forming into a lather when put under water was a new experience and one of its own kinds. She further explained that Savlon Swasth India mission has already reached out to more than 3 Lac children and aims to reach 1 million children in a year. She forwarded the link to me so that I get the whole idea of this initiative.
https://www.youtube.com/watch?v=VVWUlWEfJ1k
I went home and saw the video. It was really something very new and thoughtful. I was really impressed. And the important thing is that this initiative is started from school only where children spend their maximum time and listen to their teacher’s advice first. I would like to spread the awareness to all my friends and to other social groups so that they further forward the message. This way, we will be proud to be a part of one of the various educational tools deployed by the Savlon Swasth India Team to help initiate children into the habit of washing hands. 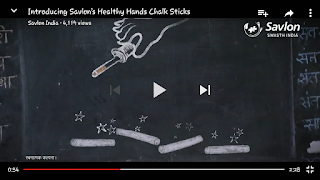