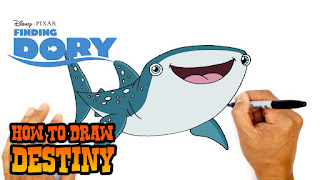 Today was the day. It was Wednesday morning and I had promised Nandini to take her to the animated movie “FINDING DORY”, thought Kadambari as soon as she got out of her sheets early in the morning. Kadambari had been avoiding this duty of hers where she has to watch a cartoon movie but anyways…She dressed up quickly and made her darling daughter ready. Both were at the theatre on time and ready with their popcorns. This was the only excitement Kadambari had about the movie except that it was a 3D movie. Kadambari watched the movie carefully so as to teach some good lessons to Nandini but she realised that there are many things that she could relate herself to.
·       Facing challenges
Never be afraid of facing challenges. They come our way so that we face them, fight them and conquer them.
·       Rescue; Rehabilitation; Release
Rescue is to save ourselves from a difficult situation. Rehabilitation is to take care and maintain ourselves. The release is to take ourselves out of the place from we have been for so long.
·       New place-new friends
When we are out of our comfort zone, we ought to make new friends, to take new steps and learn to fight the odd ones out. Many times these friends prove to be friends for life.
·       Nothing is impossible
Just keep the weaknesses aside and start trying to beat the impossible. Hard work always pays and one day we find that impossible has changed into possible.
·       There is always another way out
Many times working in one direction leads nowhere. That’s when we should start all the way from the beginning and there has to be another way out.
·       The sinking feeling!
At one point, you will feel that you have failed in every way, in every aspect. Now there is nothing that you can do more to achieve your goal. You feel blank. And suddenly, you see your goal in front of yourself. The goal for which you had been trying so hard. Your life feels like it has been paused with a remote control. It feels like you are sinking …..Sinking down under. You are in no position to react…to differentiate between reel and real. This moment, you had been waiting for ages and now you have actually achieved it.
This happy feeling is incomparable and could only be completed by thanking God. That wishes do come true but only at the right time.
Kadambari was over the seventh moon. It was hard for her to accept that it was a cartoon movie which she has just enjoyed so much. She was speechless. She wanted to be back home and jot down the important lessons she learned from the movie. Nandini was really happy after watching the movie and eating the popcorns. While way back home, Nandini asked Kadambari “Mom, did you like the movie?” And Kadambari laughed to herself thinking, “Liked” in fact it actually took me to another world. She never had an idea that animation movies could be informative and motivating also.